We were pretty excited to get to the Dead Sea and hop into the salty water to see how well we would float. Tyson doesn’t seem to float much at all in fresh water so he was quite interested to see how his would pan out. Also we were excited to get back to the warm beach weather.

We drove the 1.5 hours from Be’Er Sheva, dropping from 500 meters above sea level down to 400 meters below sea level. The girls slept the entire way except for one wake up cry when we hit around -100. We guess because of their popping ears, but then shortly fell back sleep until we arrived. 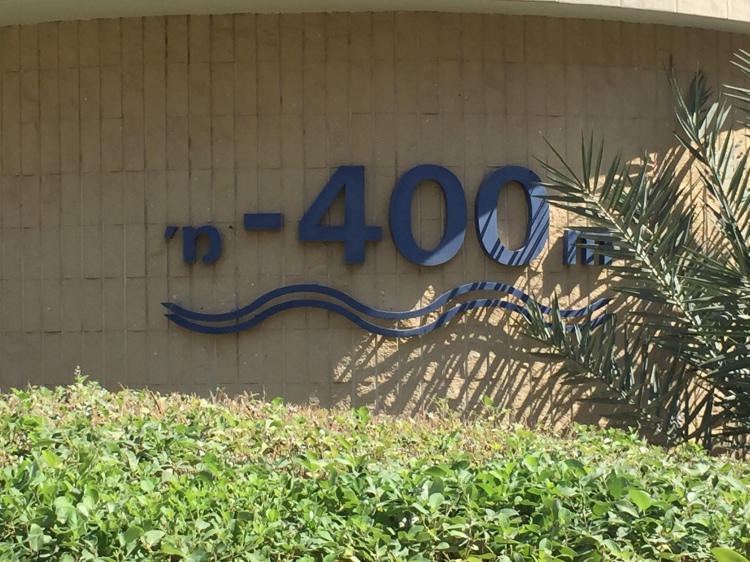 We checked into the Oasis Dead Sea hotel which was again pretty fancy for us but also right across from the beach. This hotel included a buffet breakfast, sea view, outdoor pool, beach towels and even a beach chair.

The Dead Sea is predominantly known for being the lowest point below sea level on earth and its high salt content at 31%. However, the sea is also famous for its water’s high mineral content with suspected healing properties as well. We off loaded our bags and headed down to the sea around 5:00. By then the sun was losing its heat and had just begun to set so a swim was out of the picture. We did walk in knee deep to check out just how warm it was.

The Dead Sea area has no full time residents as all you will find is high end resorts, a classy mall and a couple souvenir shops and restaurants. The entire shore line has a very nice set up walking promenade so we took an evening stroke on that before ducking into the fancy pants mall for a look around and a bite to eat. We found a little cafe and enjoyed a pasta dinner then meandered back to the hotel to put the girls to bed and relax with a movie for the night.

Bexley, being pretty excited for the Dead Sea mud bath.

A quick elevator ride to the lower level and we were into our buffet breakfast that had everything you could imagine. With full bellies and flip flops on we got organized and found some warm sand down at the beach. I got settled with the girls and Tyson headed straight to the sea. He walked in about knee deep before struggling with his footing. The floor bottom quickly changed to a solid hard pack of cement like salt crystals. He looked over at others and decided to sit down and couldn’t believe it, he was floating. It was amazing, you could be so close to shore, in only about 8″ of water, and still be floating off the bottom. The sea floor was really warm, the heat was radiating up. Closer to shore the sea floor was pure salt crystals which then changed to orange sand right near the waters edge. 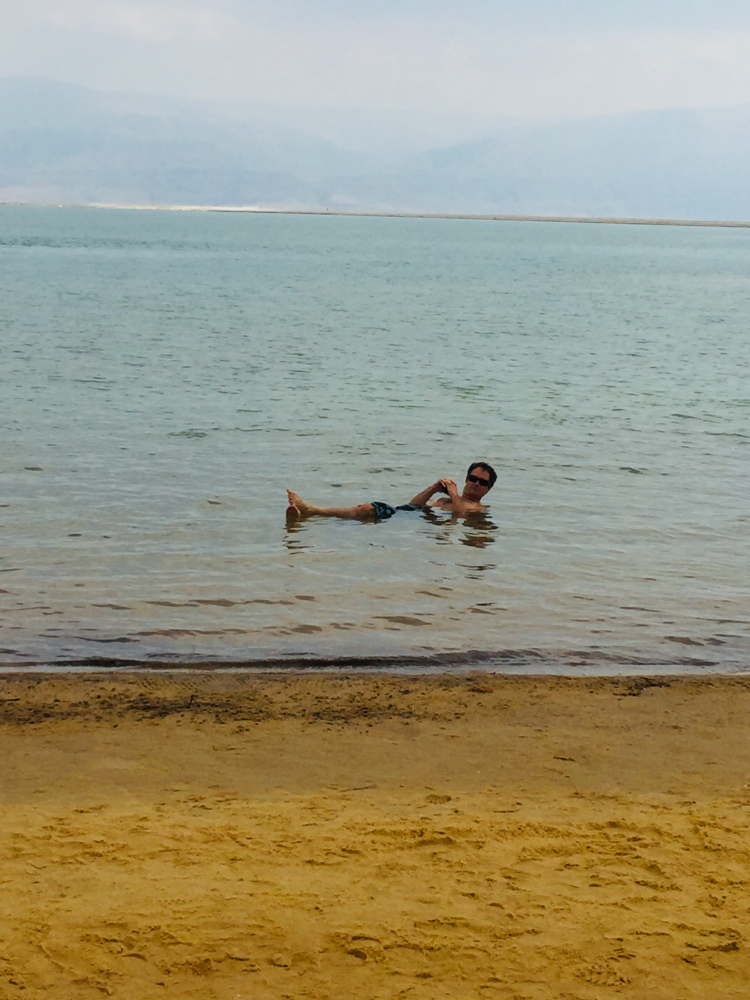 Tyson is actually floating and not touching the bottom. He is only in mid calf deep of water here.

We put the girls’ feet in the water but that was all for them. The feeling of being in the water is hard to describe. It takes effort to sink your feet underwater and all the oils and minerals have your skin feeling so soft and smooth. Tyson tasted the water and it actually had a more toxic taste and would burn your eyes if you got splashed. When you get out of the sea you don’t really dry off like normal. The water just sits on your skin and doesn’t really evaporate like you are used to. There were fresh water showers at the beach and the oils just rinse off instantly. Tyson took advantage of this new sensation for a while as us girls relaxed on shore and Bexley ate sand, yum!

Once Tyson was done it was my turn. It was really relaxing and quiet. We returned back to our room where Tyson minded the girls and I slipped down for a 1 hour relaxing massage. It was amazing.

The follow morning after breakfast we checked out of our hotel and headed back to the sea for another quick float. Taking turns, we relaxed in the sea while the other entertained the girls in the shade.

We showered off, grabbed a quick bite to eat and then headed 12 mins drive north to Masada. This is a fortress built atop a plateau on the eastern fringe of the Judean Desert 450 meters above the shore of the Dead Sea. We rode a cable car to the top which took 3 minutes and cost 148 shekels for the return trip and entrance to the UNESCO site for the two of us. There is a trail called the snake path which you can walk up and down but because it was Shabbat (Jewish holiday from sun down Friday to sun down Saturday) the park closed early and we didn’t have time to hike.

A model overview of some of the fortress.

A lot of this site has been reassembled over the years but it was still amazing to see all this originally constructed over 2000 years ago on top of the mountain. The entire area was converted into a drainage system to collect any rain water then channel it all into large cisterns. They did however have to use man and mule power to fill the cisterns in the higher regions. The network would collect enough rain over the seasons to have plenty of drinking water and to water their crops as well.

From here we all loaded into the car and proceeded back above sea level to Be’Er Sheva to share stories with Lital and shut it down for the night.

Another night or two here and we would have to say so long to old friends and hello to the northern regions of Israel, the Sea of Galilee and Haifa.

Our 2022 year full of memories in the blink of an eye
Traveling abroad is full of experiences and fun, but it also comes with missing family and friends back home.
Before we arrived in Australia our girls weren’t even very comfortable in the water let alone able to swim.
Kids are kids. They adapt to their surroundings.
A must do with kids when in Airlie Beach
A little photo dump and update.
Loading Comments...
%d bloggers like this: