The next leg of our trip had us in the northern region of Israel. Due to this fact we rented a car and gained a lot of freedom to explore many small towns and county roads. Israel is a rather small country only stretching 420 km north to south and west to east 114 km at its widest so the rental agreement allowed for unlimited kilometres. The road system was really good here and being freshly paved and clearly marked it really didn’t take long to get anywhere. We also downloaded the app “Waze” to help get us around but the Hebrew map made some parts a bit challenging as we never really knew what town we were in. We could change the direction speaker to English but that was all.

We wound our way out of Jerusalem and headed to Tiberias first. Tiberias is the largest city on the Sea of Galilee and is located some 200 meters below sea level. The Sea of Galilee, which is actually a fresh water lake, is the location to where Jesus walked on water in the Old Testament. It is also the only constant water source feeding the Dead Sea. We checked into the Villa Roca, which was a tad hard to locate but once we arrived we were excited to stay in this old fortress of some sort. It has since then been converted into a 6 room hotel. We had a nice room with a great hot shower, a shared kitchen and free on site parking. We got settled then went for a wander in the streets. 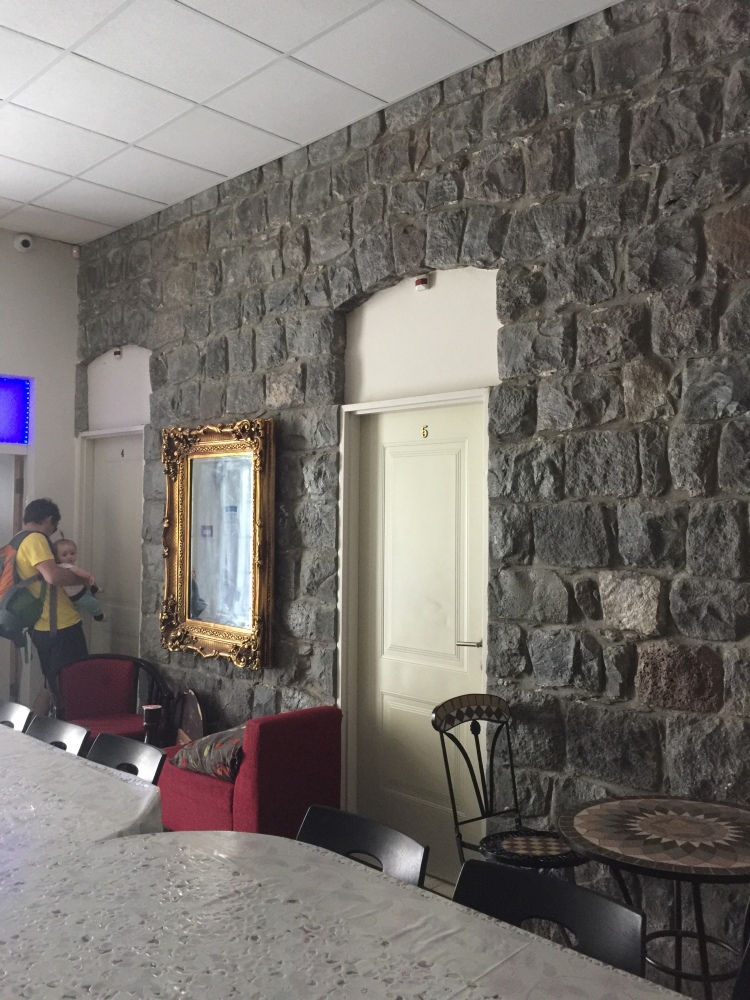 The following morning we woke up, ate some breakfast and headed to Mount Arbel National Park. This park had a series of hiking trails to a fortress and natural caves built into the side of the mountain. This hike had some pretty steep parts that involved hand holds and fancy footwork. The nice lady at the front gate told us we probably wouldn’t be able to do it with the babies in our front carriers but we figured we would have a go anyways. Lets face it, we have taken the girls on all kinds of stuff back in Canada, and probably worse that this. So we figured we would start going and if it seemed to difficult we would turn around and find a different trail do the hike. 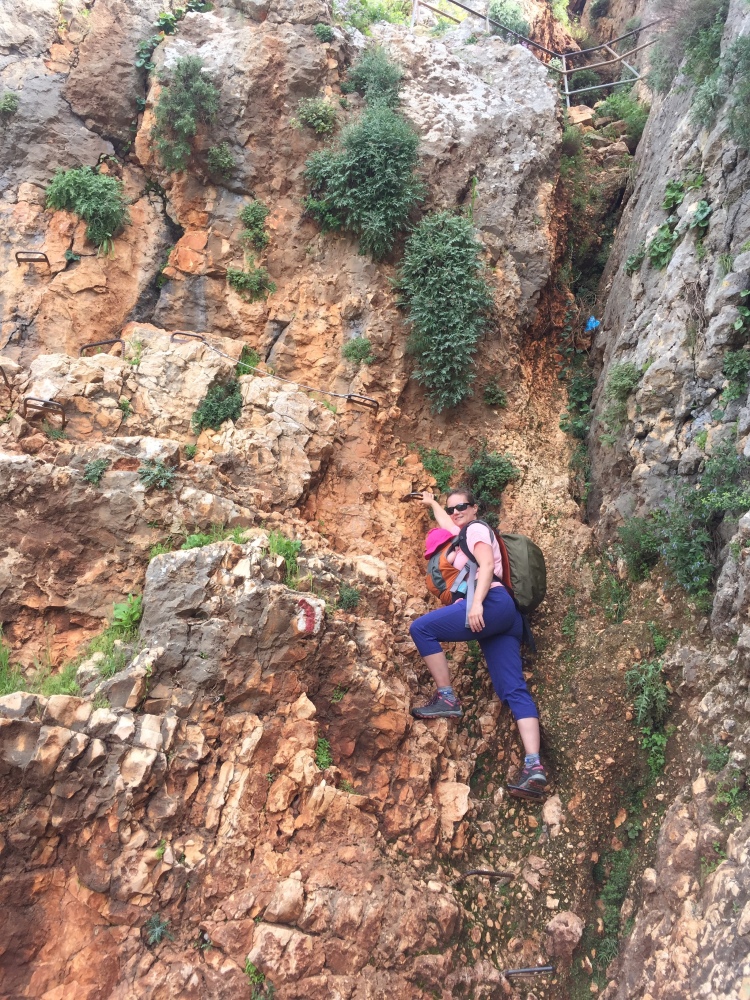 Turns out, thankfully it was way easier than the lady made it out to sound. The hike started with a short hike along the ridge with stunning views of the sea below and the snow capped peaks surrounding Mount Hermon to the north. After a short rock face decent we crossed a lush field where the flowers were in full bloom and a shallow cave gave home to cows avoiding the heat. Such a peaceful hike, and the afternoon shade was appreciated as it was 25 degrees Celsius and very humid. 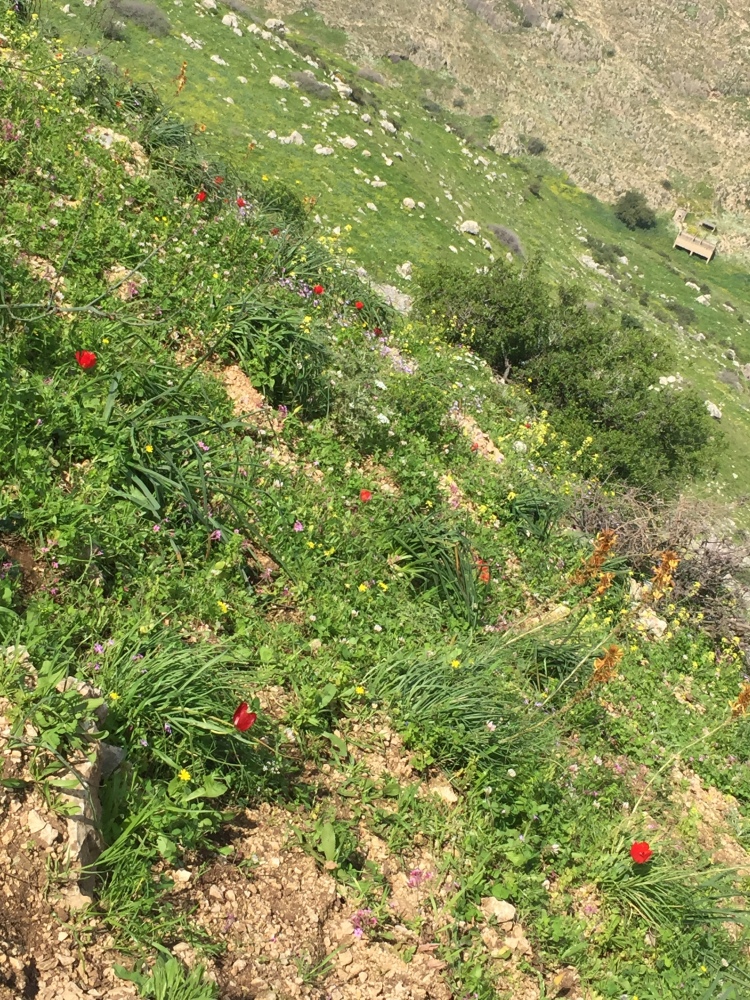 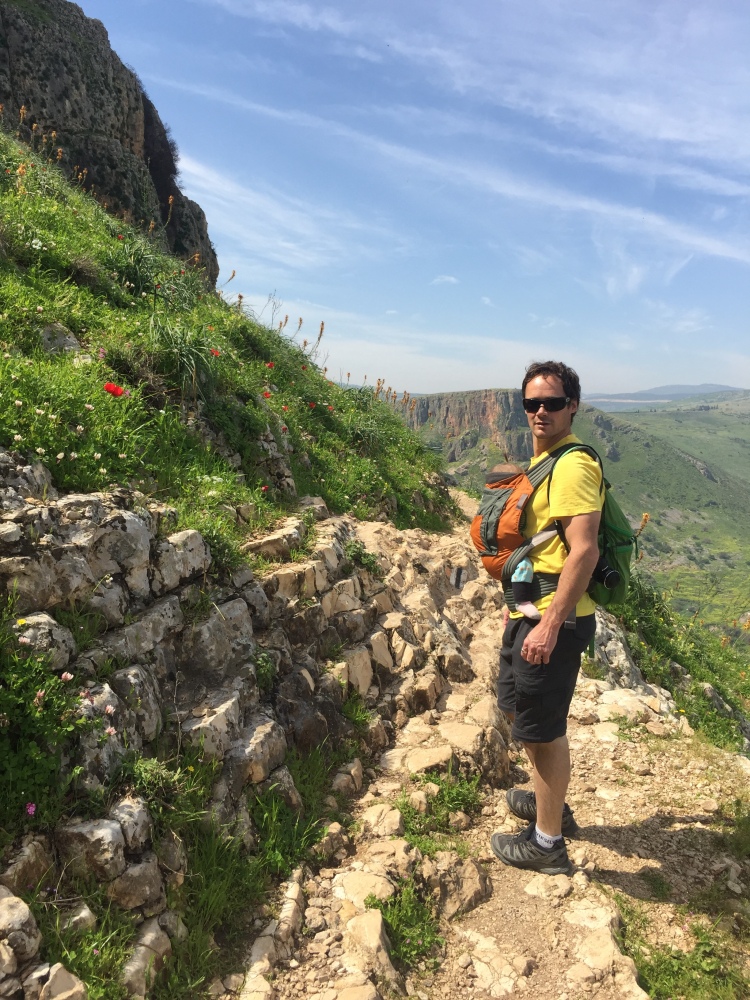 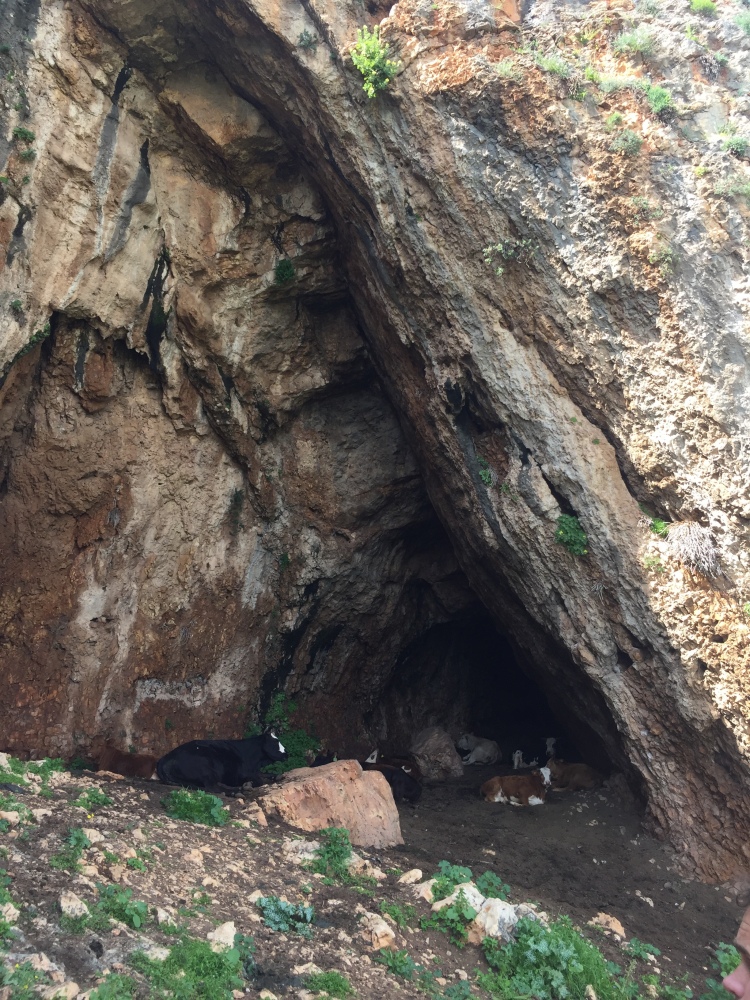 We reached the fortress after about 1 hour of casual hiking. Again this astonished us as to how this could be built some 2000 years ago and also how today we were still allowed in to wander around. The Israeli government have been investing time and money restoring and preserve them back to their original state. 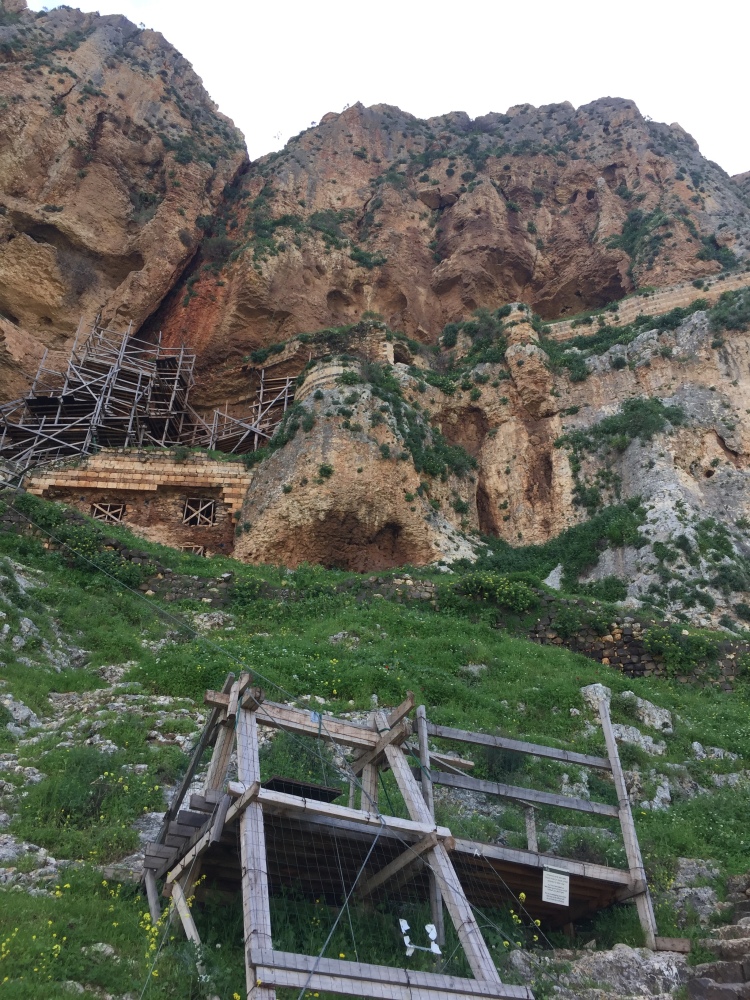 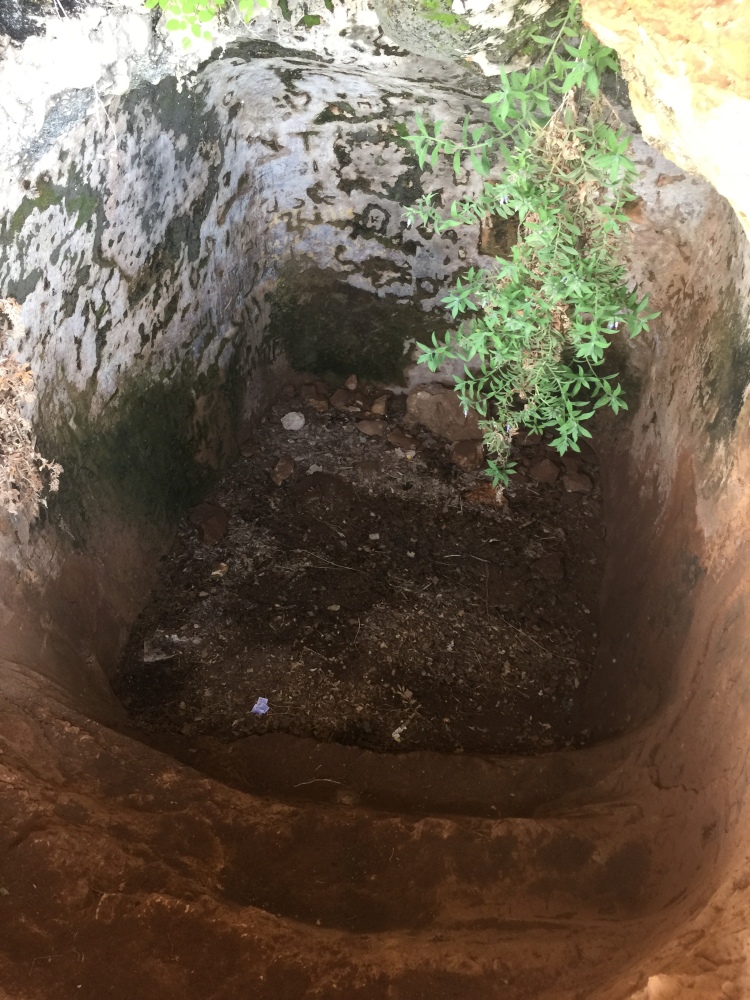 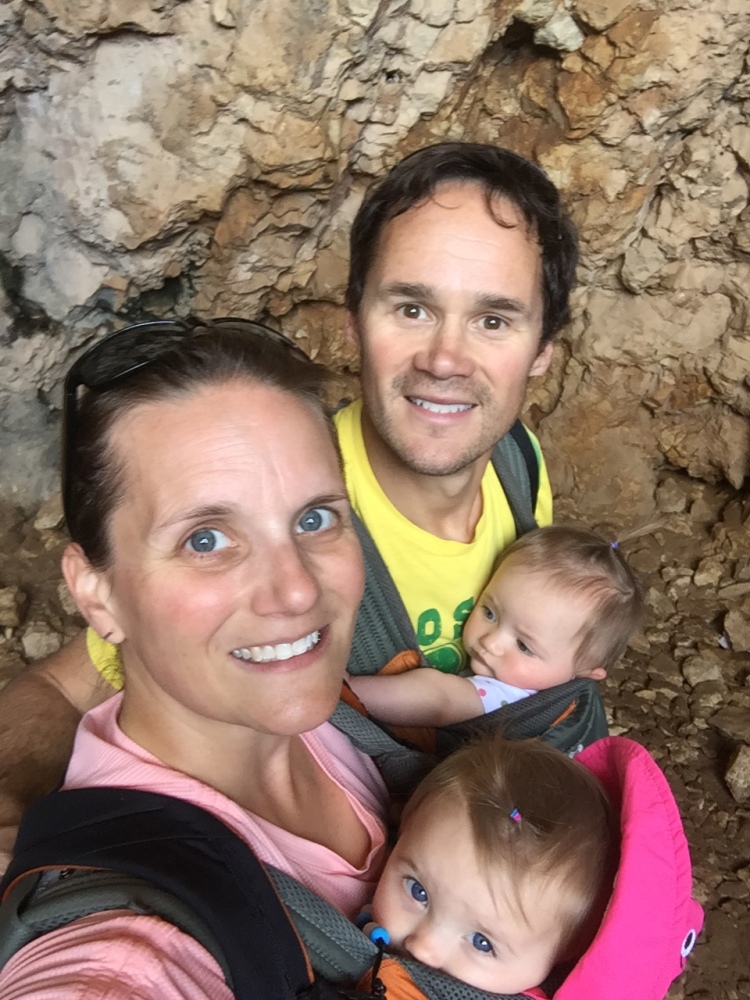 We were the only ones there so decided to sit near the bottom of the fortress and enjoy our homemade pita sandwiches we brought along. Luckily enough just after we finished lunch a tour bus full of kids came around the corner so we packed up and continued on to the refuge caves. 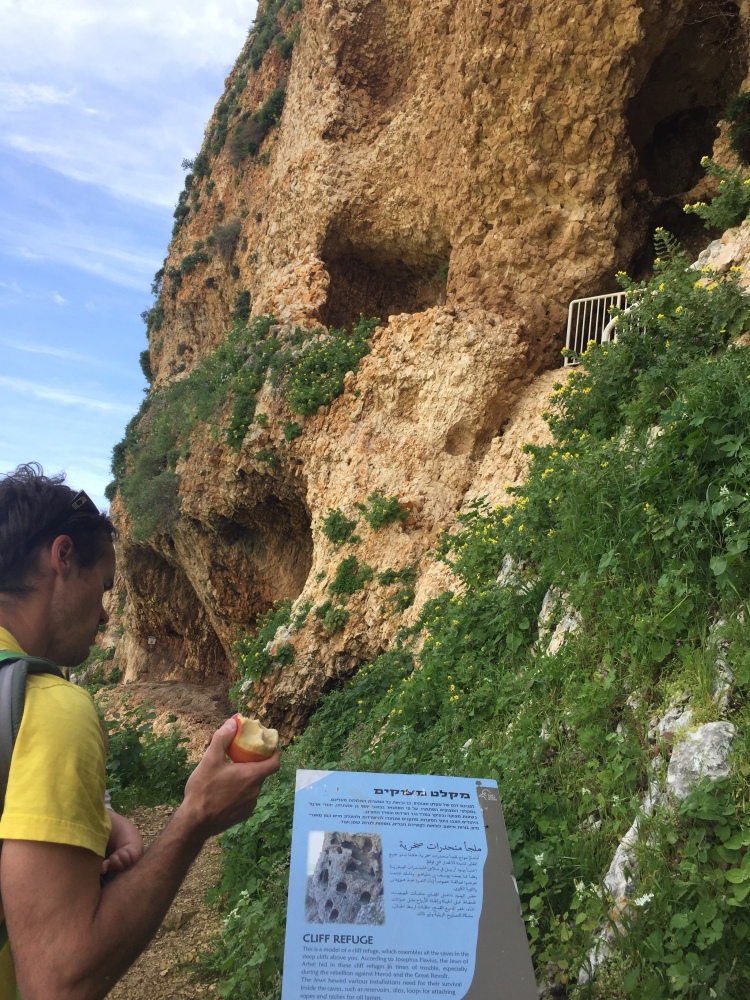 These involved a bit of climbing with foot and and metal handholds again. All in all this was definitely a must do as the flowers, fortress, and even the cows were peaceful to experience.

The following day we checked out and drove north to Roch Pina, a small hillside town which we found don’t have much going for it so we continued up to the mountain top town of Safed. This town was the highest city in Israel at 900 meters above sea level and is rumoured to get frequent snow falls in the winter months. We refuelled the car, enjoyed the view and headed back down programming Waze for Acre (Akko) where I had found an underground tunnel for us to explore.

We pulled up to the Templars’ tunnel parking area finding the perfect spot and started walking towards what we thought were the tunnels. We ended up on top of the old wall built around the town with an amazing view of the Mediterranean Sea. We gazed for a bit and enjoyed the fresh sea air. Then we wandered along the wall, down a staircase and with the help of a store owner came upon the tunnel entrance. I had found on the website that the fee for just the tunnel was 15 shekels. We asked for a ticket for just that and the guy said no there was no such thing. I was trying to google it to show him but because we were already beneath the surface there was no service. He picked up his land line to ask some questions but the other end would not budge. He wanted us to by a combination ticket which was for multiple attractions including a Turkish bath. We didn’t want that nor did we have the time as it was already 2:30 pm and most everything was closed by 5:00. So we said no thanks and walked away, both a bit bummed out. We went back over the top wall and found a nice place to sit looking at the sea, fed the girls then proceeded to our next destination of Haifa.

After going through the amazing Carmel road tunnels, with a length of 8.6 km connecting the north to the south of the city, we arrived at our new apartment. There was way more room than we needed with two bedrooms and even a washing machine but was also located right across from the sea and had some stunning sunsets. I was pretty excited and quickly rushed to get two loads of laundry done so they would have time to dry in the two days we would be there. Now that we had a kitchen we then headed out to find a supermarket to grab ingredients to make some meals for the next couple days.

After a relaxing morning we set out for the day to see the city and the Baha’i Gardens in particular. These are what people come to this town for. They are garden terraces around the shrine of Bab on Mount Carmel. They looked spectacular. 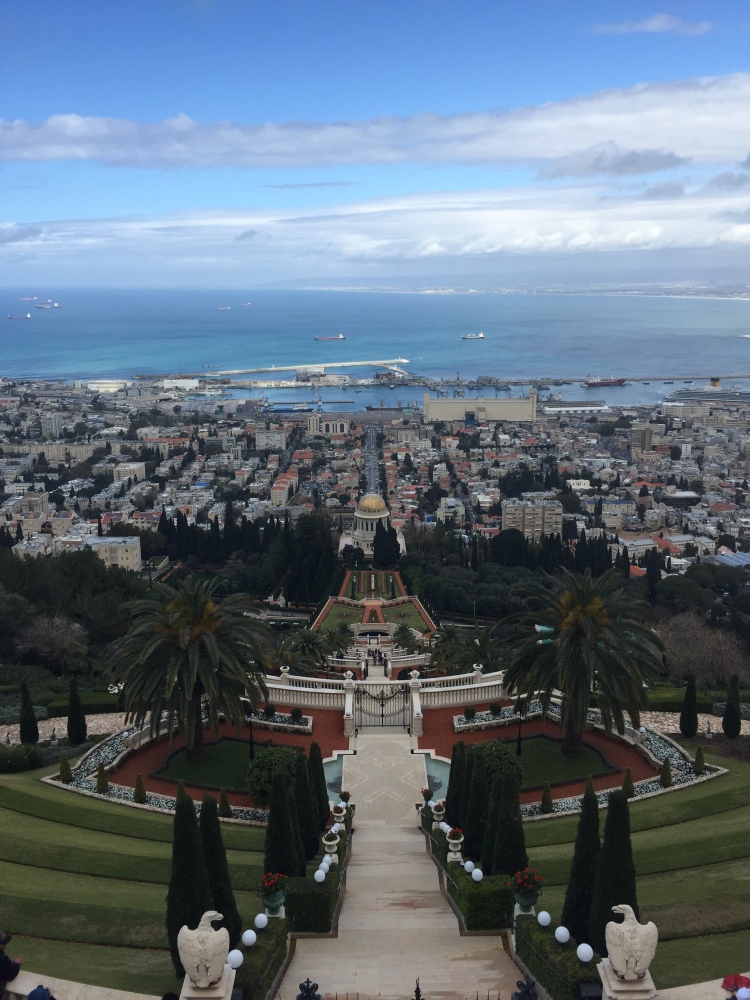 We arrived at the top main gate, waited in the line to go through security with the 100 others. Once inside we soon discovered we could only walk down a flight of stairs to a viewing platform before we were confronted with a locked gate. There was security there telling everyone they could wait an hour and if there was room they could join a walking tour inside. This would be a free tour but the time slot had it slated to be in Russian. She then said we could drive to the bottom and get in that way. So at this point it had started to rain we decided to drive to the bottom of the hill and try that. Once we got parked and the girls loaded up the rain started to pour down. We were forced to return to the car and wait the 10 minutes for it to pass. The sun came out and we headed to the bottom gate. Here we again had to go through security and we were in. Time to race up the stairs and look around. Nope, this is as far as we could go. The stairs were closed because of the rain making them too slippery, and even at that you could only go to that next terrace and no further. By now we were super bummed and decided to give up and just go get a bite to eat and call it quits getting in the gardens. 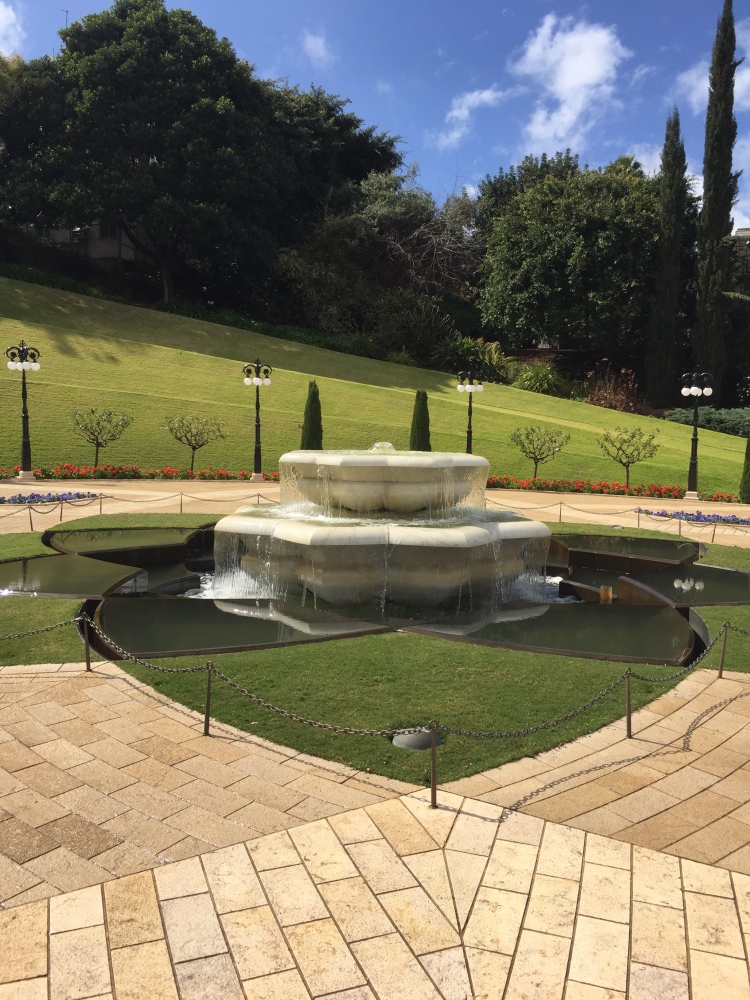 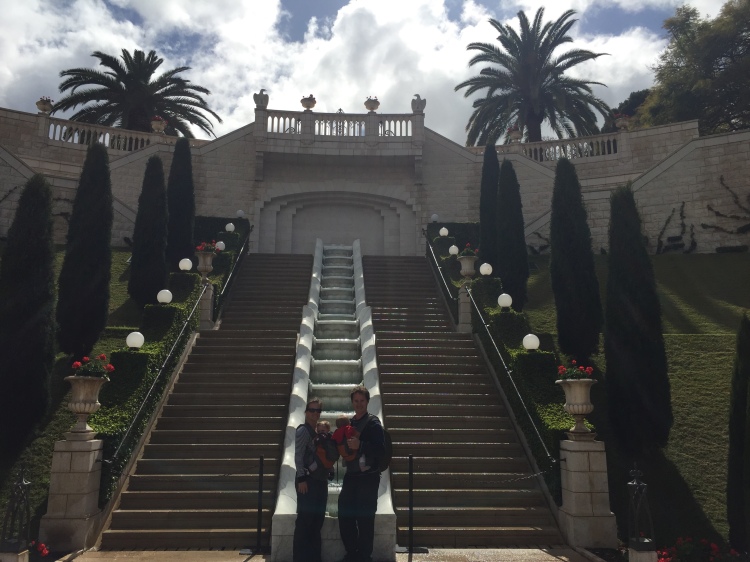 We decided we would try one last sight before heading back to the apartment, Elijah’s Cave. The cave is the location where Elijah rested after travelling for 40 days and nights. The following morning Elijah had been taken by the gods. We debated on whether we could even find this place as our GPS kept giving us different directions and destinations. We saw two signs for it that led to nowhere we thought. We drove around and around, in circles, backtracked, made a stop or two then finally parked on the side of the road and started walking. We did finally find it up some stairs on the side of the mountain. 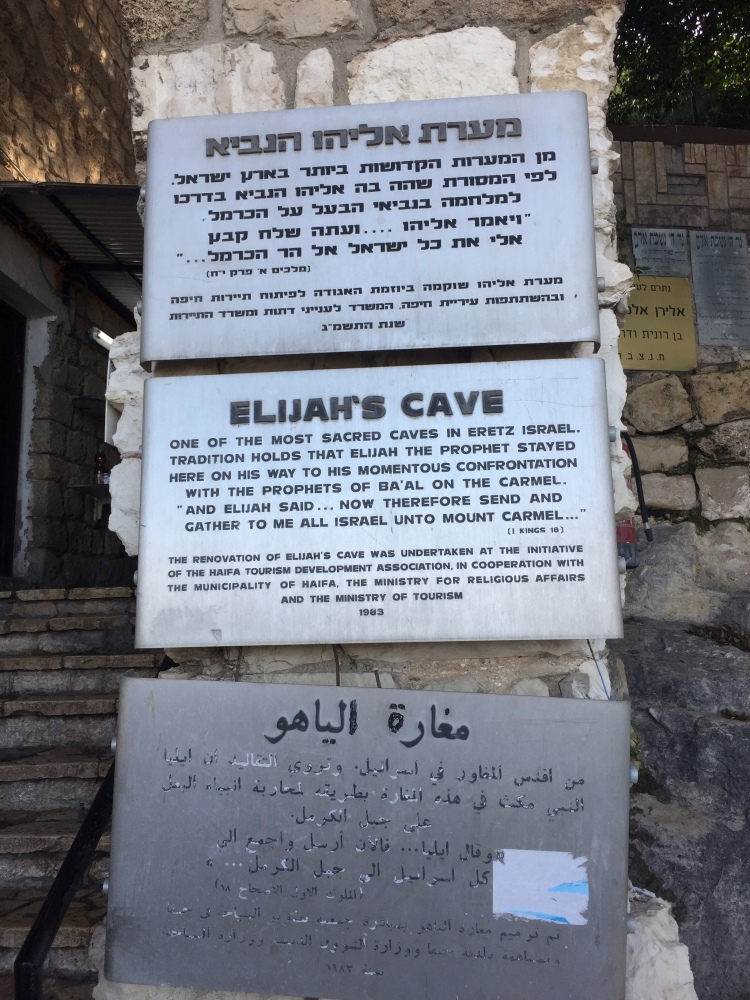 The cave is now a religious site where prayers are quietly read by whom ever comes to visit. It is separated to a women and men’s side and proper attire must be worn including a head covering to enter.

We took in some views of the sea and called it a day. 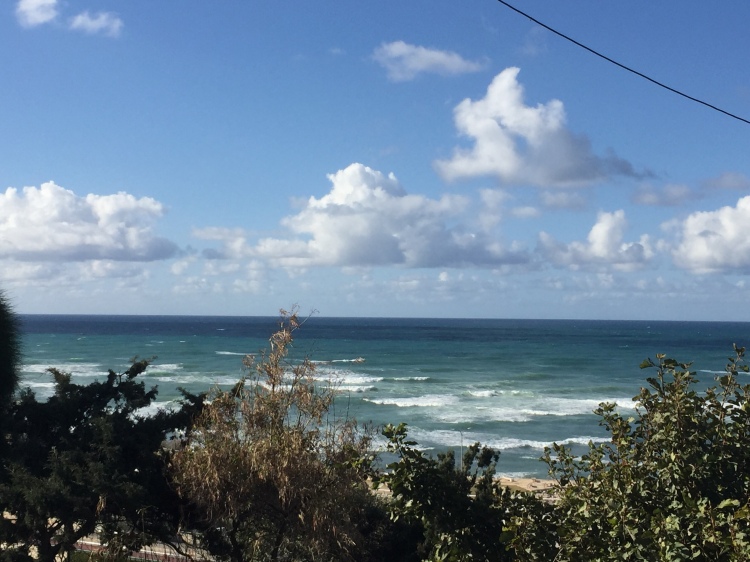 We left Haifa around 10:00 am and headed south to Caesarea National Park. This was the ruins of a great port city created by King Herod. We wandered through this making our way from where the horse chariot races were hosted to the Roman theatre to the swimming pools on the ocean side. All in all these were beautiful ruins. We had seen so many ruins through our travels in the last two months that we found ourselves starting to compare them to others. This was a really beautiful spot to build a city and we could only imagine how great it was back in the day. 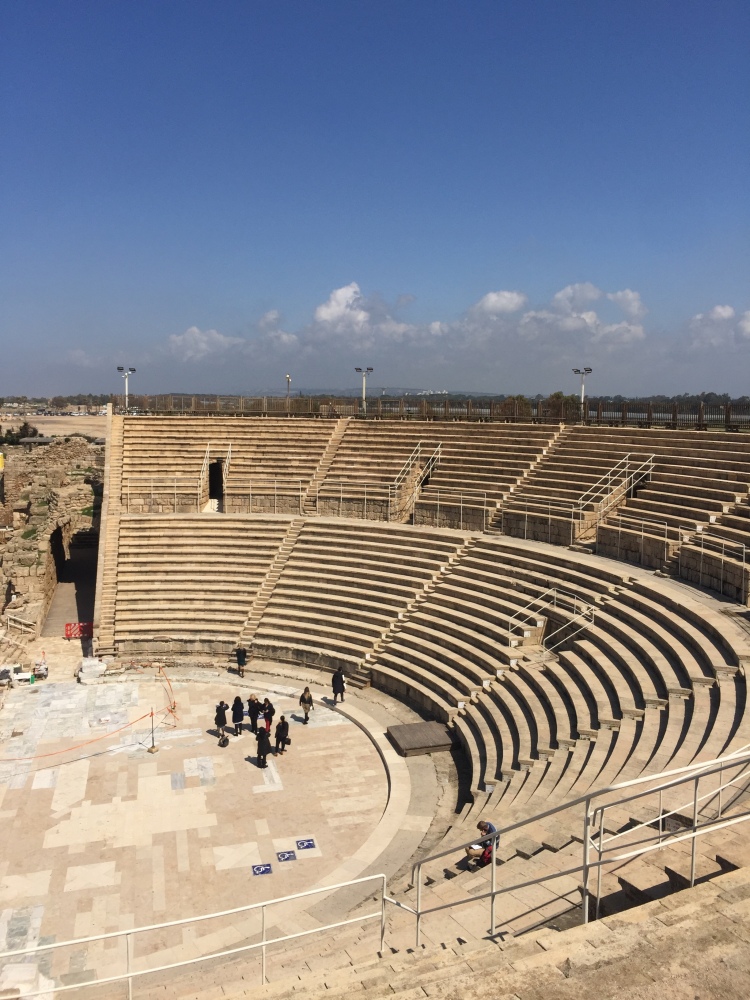 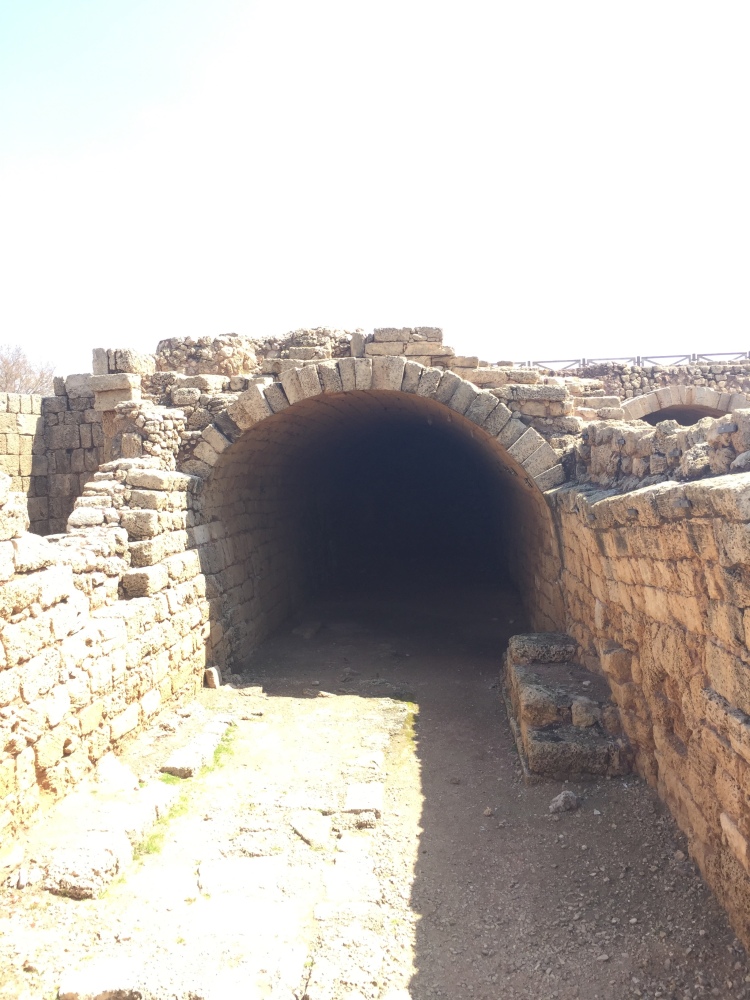 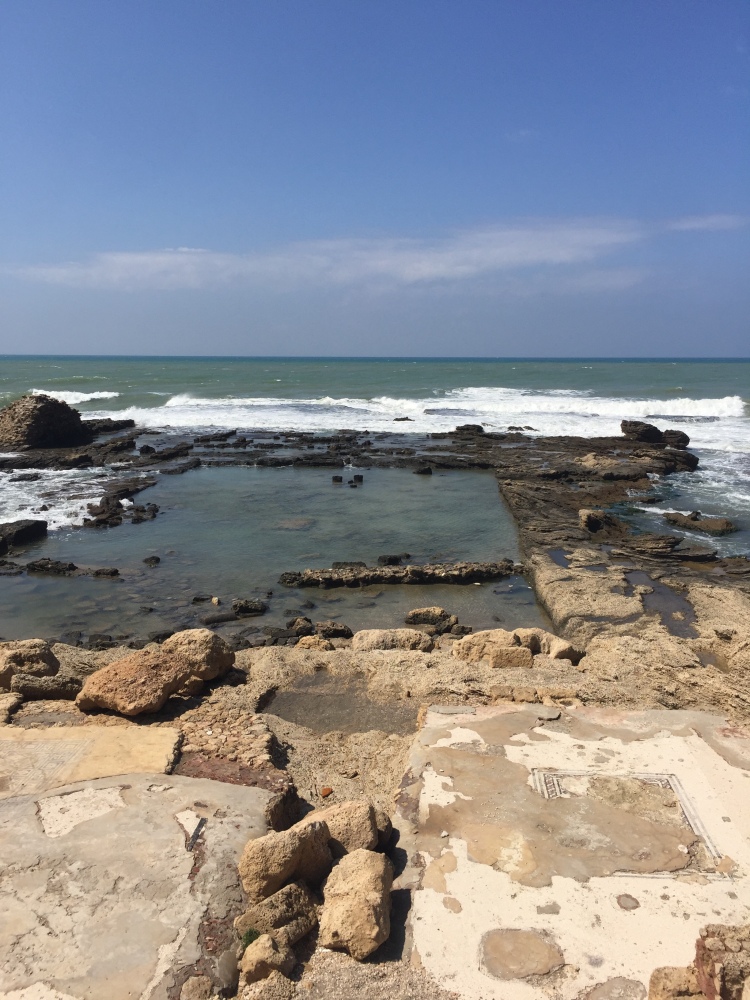 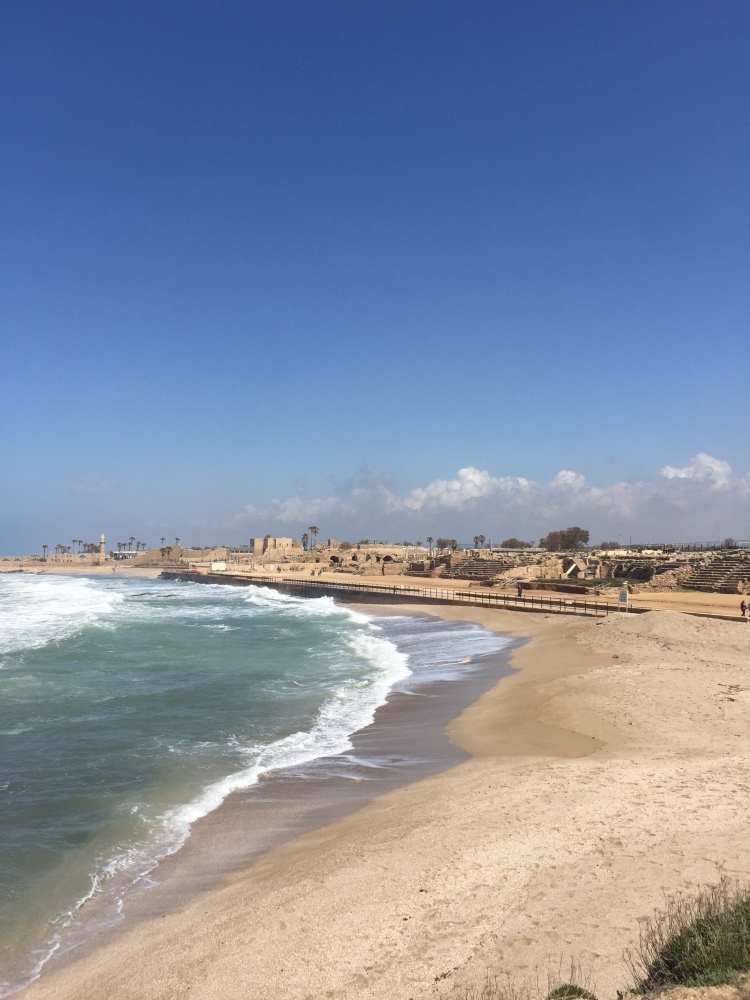 We jumped back in the car and continued on to Tel Aviv. With 6 minutes to spare before Shabbat we managed to drop off our rental car and check into our final place before making the long trip home.

Our 2022 year full of memories in the blink of an eye
Traveling abroad is full of experiences and fun, but it also comes with missing family and friends back home.
Before we arrived in Australia our girls weren’t even very comfortable in the water let alone able to swim.
Kids are kids. They adapt to their surroundings.
A must do with kids when in Airlie Beach
A little photo dump and update.
Loading Comments...
%d bloggers like this: