We thought we would take the ferry from Sharm El-Sheikh to Hurghada but once in Sharm we found out the ferry no longer ran. I was not about to take the 8+ hour bus ride back to Cairo then a 10 hour train to Luxor so we decided to fly on Egyptair the 30 mins from Sharm to Hurghada. We found ourselves spending a night here then catching a bus off to Luxor for a few days. I booked the Regina Swiss Inn Resort and Aqua Park, and when we touched down it seemed rather fancy. It was 670 LE or $50 Canadian for the night. Breakfast was included and it was a stones through from our room to the beach. It was primarily an all inclusive get away for people from Europe but it would do the trick for one night. We then took the Go-Bus from Hurghada to Luxor, a 4+ hour bus ride. After about 5.5 hours we finally arrived in Luxor.

We grabbed a cab to take us to our hotel which was unknowingly super close although he took us the long way around just to get our moneys worth. We checked into Susanna Hotel right across from the Luxor Temple. The room for 4 nights was 2100 LE or $158 CAD with breakfast included. It was a very pleasant hotel with friendly staff, a rooftop patio and even a swimming pool. Our room overlooked the Luxor Temple to the west and had amazing sunsets across the Nile.

Our plan was to explore the East Bank first, starting with Karnak Temple, 150 LE. This was about 3 km away at the far end of the avenue of the sphinxes. Outside our hotel we hopped on a horse and carriage and for 60 LE or $5.50 CAD we trotted around through traffic to Karnak Temple. The driver then waited out front as we explored the ancient ruins were he then brought us back. There was an endless supply of tour buses making day trips from Hurghada when we arrived which made us feel like cattle through the gates in some places. The temple itself was an amazing place. Just like the pyramids you would be left wondering how on earth did they build something of this scale. The detail that still remains carved into the stone is something that can only be appreciated in person. After walking most the corridors and battling mild sun burns and dehydration we decided to exit back through the gates. As we were leaving we noticed that the crowds had thinned out dramatically and most of the tour busses had gone, so best time to go would probably be around noon or 1:00 pm.

Late lunch was eaten, the girls were let out of the carriers for a stretch and nap then we were off again to the Luxor Temple, 140 LE. After seeing the Karnak Temple that morning this one seemed rather shadowed. We both felt like we should have waited to visit in the evening when it plays host to a light and sound show. You could walk completely around the outside of this temple on the road so if you aren’t a huge sight seeing person or want to save a few LEs you could just do that instead, you just would miss the details that are carved into all the surfaces. It really is an amazing place that should be appreciated, just our viewing order was a bit reversed. 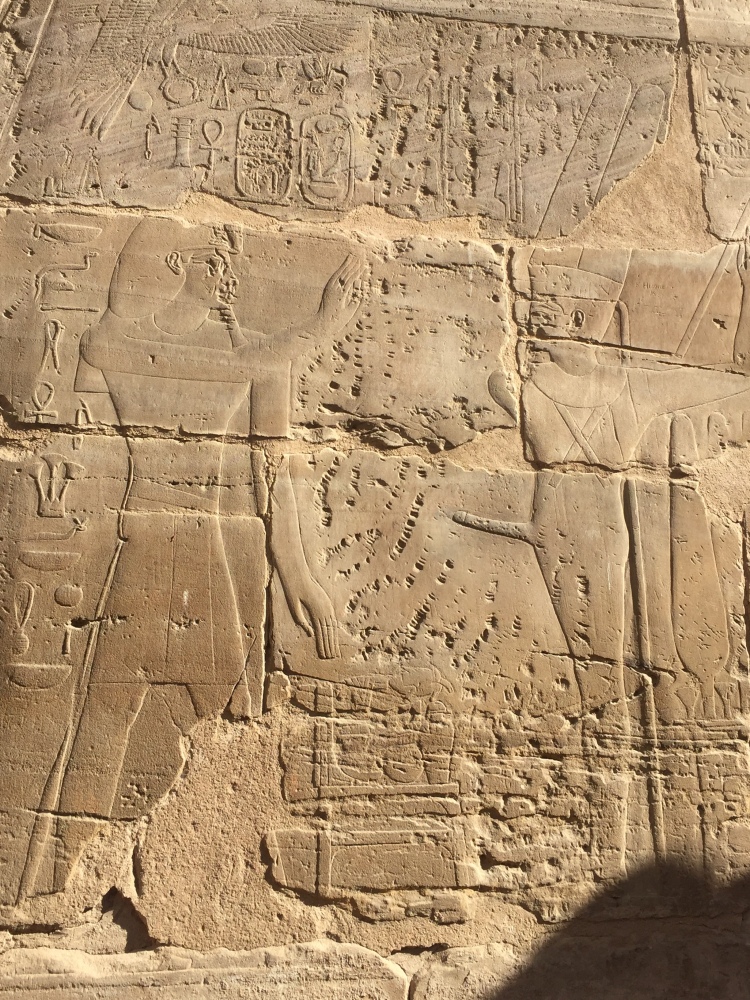 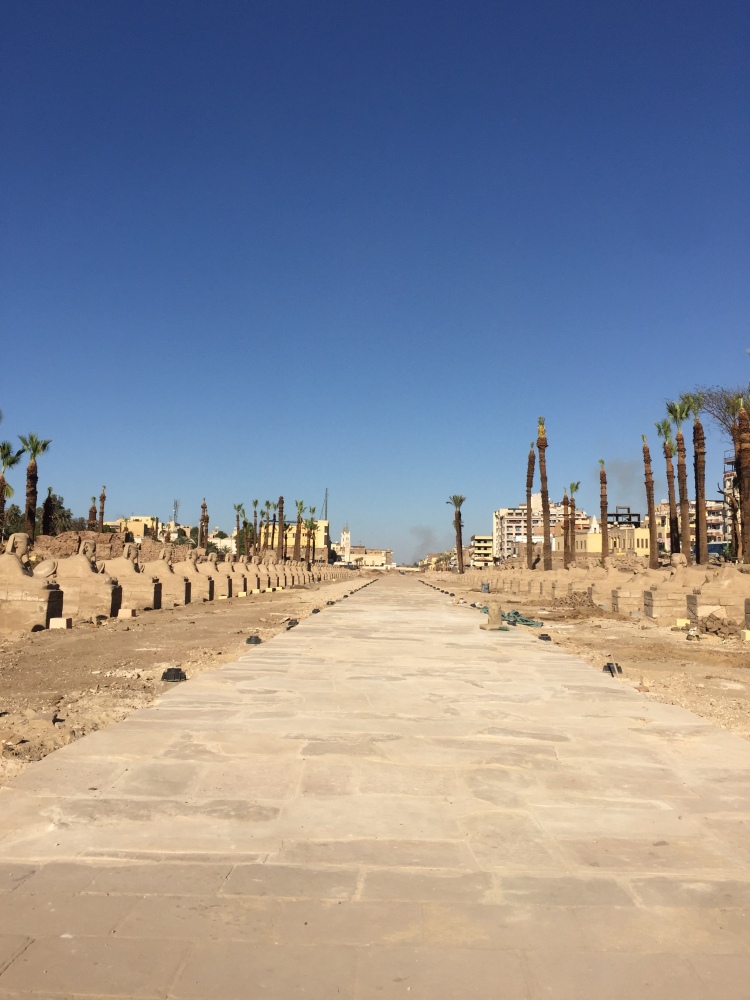 In the evenings we would do what we enjoy the most and duck into the markets. Just behind our hotel was everything you could imagine from clothes and hookah pipes to eggplants and spices. We would barter for items but not really purchase anything as we were just getting a feel for the prices. The locals were all super friendly and obsessed over the babies constantly wanting pictures of them. This got rather annoying at times as they had no issues with waking them up so they could have a look at the girls and kiss their hands and head.

The proceeding day we headed to the West Bank to see Valley of the Kings and the Temple of Hatshepsut. We loaded our day packs with cameras, water and diapers and walked across the way to the local ferry terminal. The boat was 5 LE per person and babies are always free. Just prior to getting on the boat we were met by a local fellow who latched onto us promising a taxi ride around the West Bank. The price was getting lower the closer we got to the shore and the other drivers waiting for us across the way. We agreed to 200 LE to the sights with no stops at market and souvenir shops where these guys get commissions for bringing us in. He ended up being a very nice guy, spoke english fairly well and was pleasant to be around. The West Bank is dramatically different from the east. Things moved a lot slower and the atmosphere less chaotic. There were large fields of sugar cane and other crops and no one following you around to get you into their horse carriage.

Our first stop was Valley of the Kings, 200 LE. This price gave us site access and entry to three of the 8 tombs that were open that day. If you wanted to visit all 8 this would come with a fee as well as a couple big hitter tombs that were accessed with a 1000 LE price tag. We chose our stock three of KV 2, 8, and 14 starting with the furthest away and making our way back.

Egypt in general seemed to be a bit of a confusing place as they had a stack of rules but not all that often were they enforced. Photography at the tombs was one of them. Signs were posted everywhere stating “no cameras” with threats of taking them away but everyone there was walking about with selfie sticks in hand. We were a bit reluctant about the issue so tried to make our photography as discrete as possible. As you walk through the tomb entrances you immediately were hit with carvings and paintings on the walls and ceiling. Some of the well preserved tombs still had all the colours on display. The long descending hallways took you deeper into the mountainside and ended at a large room with a stone sarcophagus on display. Every section of the tomb was chiseled differently from the next with such precision and accuracy it would have you believe it was done by machine. Tyson always wondered what would happen if the handyman messed up. 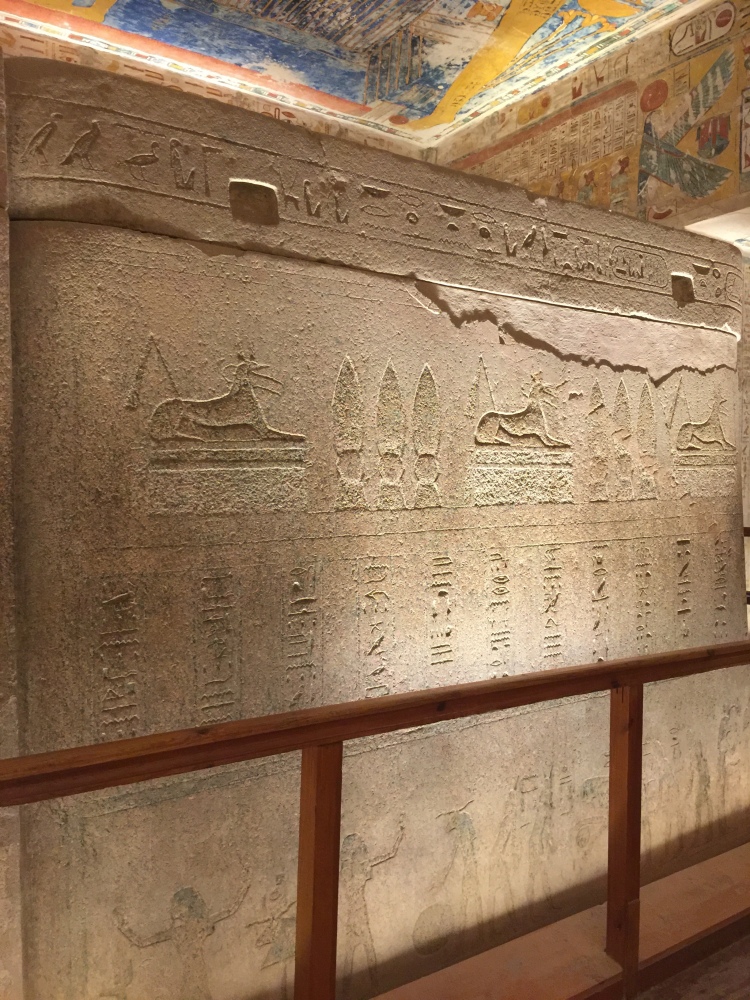 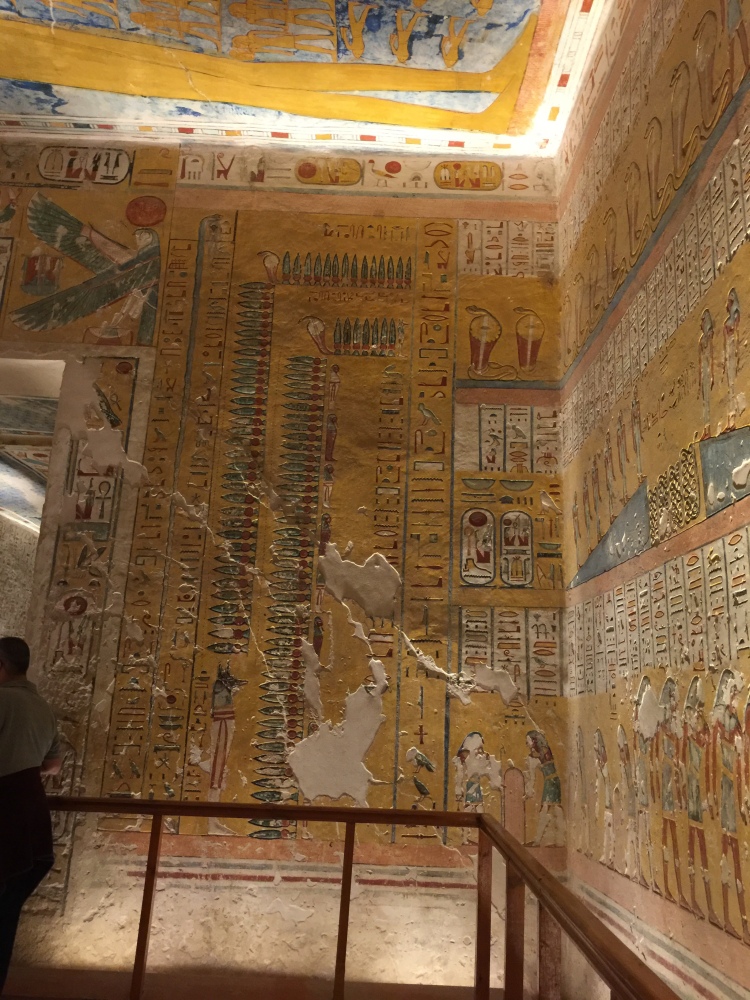 A short drive away we made a stop at Hatshepsut. This was a large temple that has been nearly 100% rebuilt. Similar to the other sites you see in Egypt, the scale of this place make it hard to take photos and nearly impossible to do so with out any others in the frame. Multi levelled with columns, pillars and walls that were uniquely engraved all telling a different hieroglyphs story. 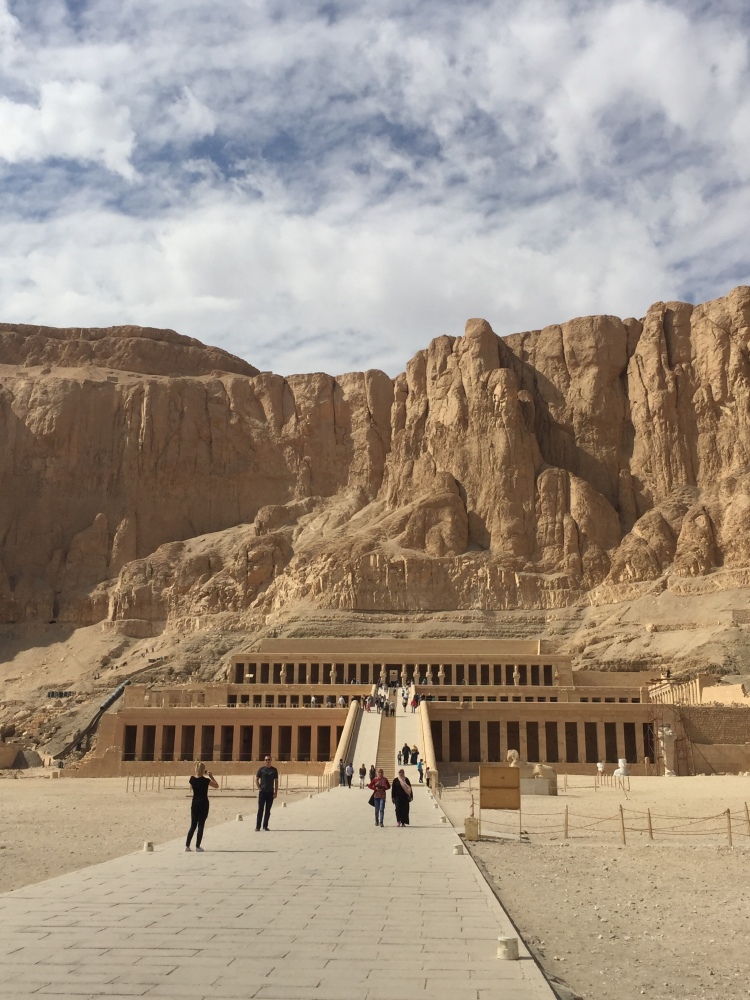 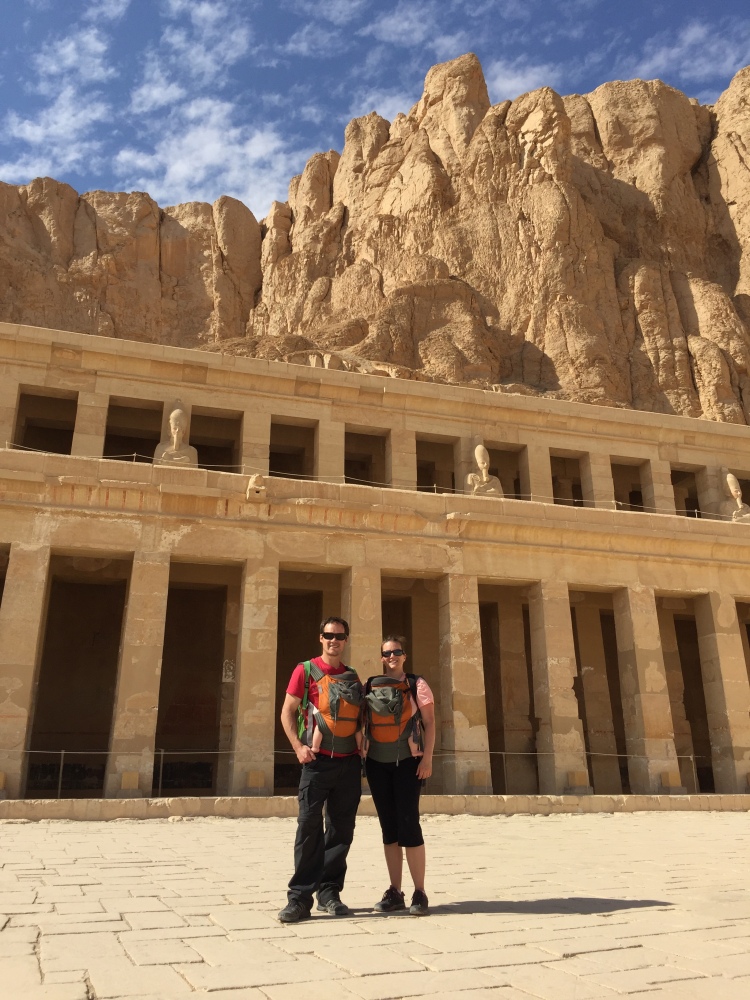 We returned back to the boat dock and across the Nile once again to the east side of the city. From here we had a quick regroup in our room and headed to the streets for our favourite rotating meat on a stick dinner that the locals call Shawarma, not to mention the random flavour selection of chips.

Again came time for Tyson to do bloodwork. We hopped on a horse and carriage and for 20 LE. The driver, just a young boy of 18, found one that wanted us to come back at 9:30 pm so he located us to another lab not too far away that brought us right in. This time it cost us 150 LE. Results were ready in one hour, which we just walked back for. These results were a bit on the low side so Tyson adjusted his medication accordingly.

To end our time in Luxor, Lidija got her first 2 teeth and Bexley started to crawl so we decided to celebrate and take a sunset sail on the Nile. This was calm and quite relaxing; a must do I would say. 130 LE for our little family of 4 set sail and settle down as the orange sky faded to darkness beyond the palm trees that dotted the shore. 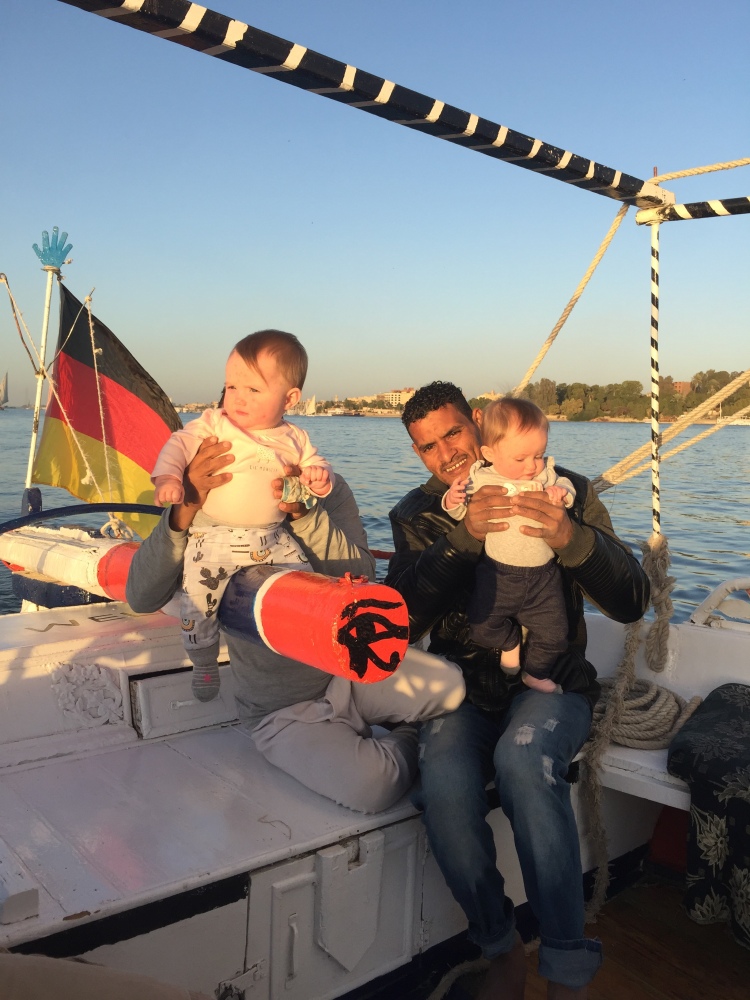 The following morning we hopped back on the Go-Bus and headed to Hurghada. We spoiled ourselves back at the Regina Swiss Inn Resort for 2 nights of R and R before our flight back to Sharm El-Sheikh and the Sinai peninsula. Here we took advantage of the local Gad eatery, the beach chairs and tried to relax with 2 babies, but anyone who has kids knows just how relaxing that could be.

Those 2 days ended up being glorious as the events that followed were anything but. Our next handful of days were action packed with travel and hiking and more travel.

3 thoughts on “Hurghada and Luxor, Egypt”