This is one site you can’t miss when visiting Jordan, probably the reason why most people venture to Jordan in the first place. It was the most anticipated and exciting part of our time in Jordan. We purchased a Jordanian Pass before we left which gave us access to most sites in Jordan for a 14-day duration. When purchasing the pass we had the choice to buy a single day or a 2-day option for Petra which we figured we could enjoy most.

We arrived in the early afternoon after the 2.5 hour bus trip from Wadi Rum, 7 JD, got settled in our hotel which was nothing special but in a great location, had a quick feed then ventured to the gates of Petra. I was already so excited at this point, I could hardly wait to start the 1.2 km walk through the siq (canyon) with its colourful and narrow vertical walls. Around every corner I was waiting in anticipation for the view of the treasury. Indiana Jones flash backs had been running through Tyson’s mind for days. There were horse carriages flying by at a high rate of speed so you had to be careful as they didn’t give that much grace to the pedestrians. The siq walls eventually opened and we found ourselves standing face to face with this famous facade, the treasury, not to mention the hundreds of other tourists, guides, camels, donkeys, horses and vendors. We took it all in for 10 minutes then decided to explore further down the valley knowing fully we would cross paths a few more times with the ancient craftsmanship in the future.

This first afternoon we walked around in awe admiring how all of this could have been built so long ago. We wandered around past the theatre and up to the royal tombs. The sun started setting and the gates would be closing soon so we chose to head back to the hotel for the evening. 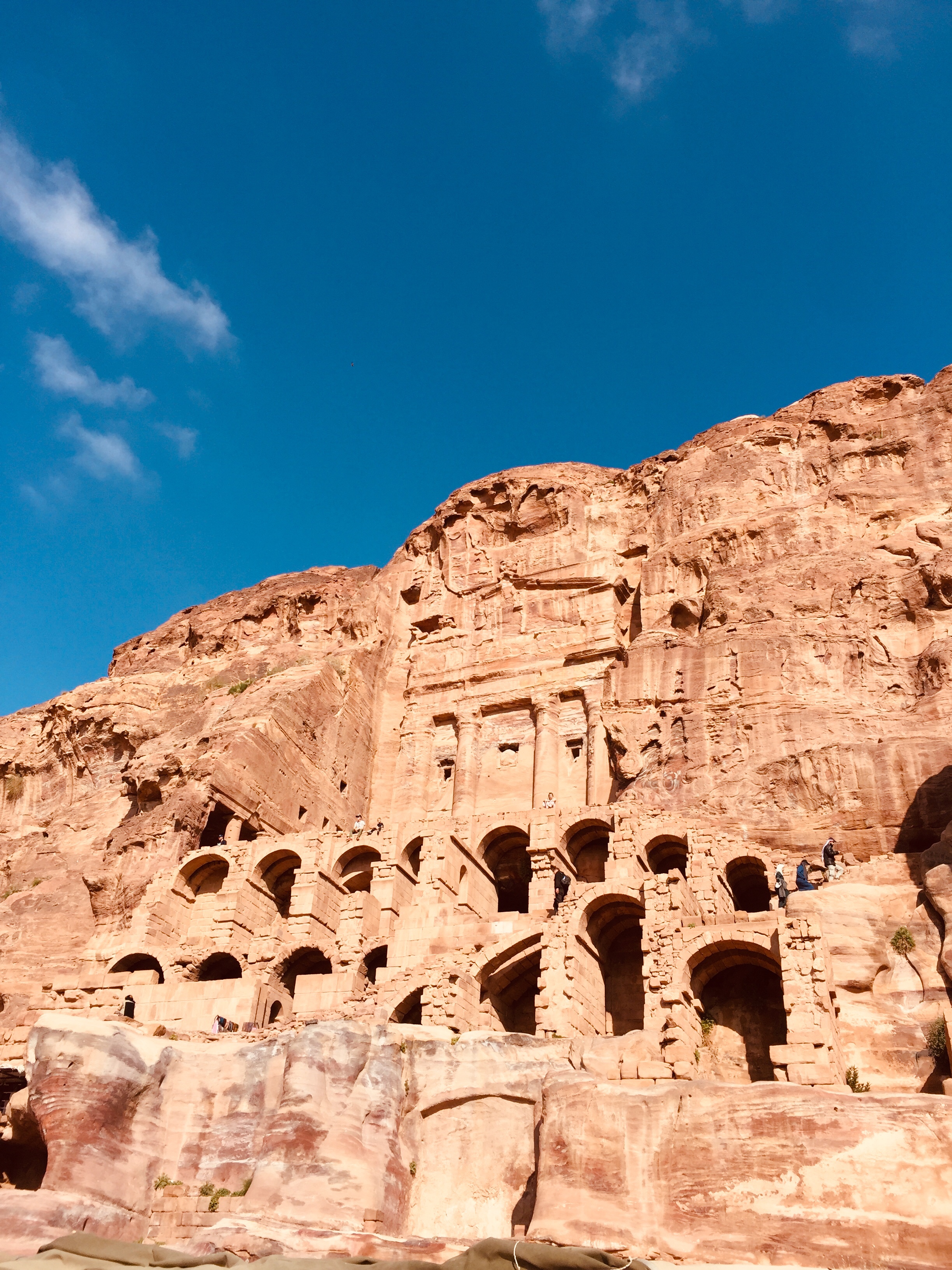 Day 2 we explored further going all the way out to the Petra city centre. The sun was out and the air was very warm. This made it extremely pleasurable to take in as many sites as possible. Having over 800 identified monuments and 500 of them being Tombs it would be impossible to enjoy them all in a mere two days time. As our Wadi Rum journey did not pan out to how we had desired we chose to pay the 2 JD each to get on the camels for a photo opportunity.

We took our touristic photo and we could hear other cameras behind us wanting pictures of the girls on the camels as well.

We ventured further down the Streets of Facade, past the Theatre, the Nymphaeum and the Colonnaded Street, spent some time exploring and relaxing in the Great Temple where the girls needed a little feed then proceeded further to the Qasr al-Bint before we looked back through the Church and one last visit to some of the other Royal Tombs and came to rest back at the Treasury. After hours of walking and gazing at the Nabatean capital the time had come to say our final fair wells and make our last trip up through the siq. Back in the town of Wadi Musa we had just enough time to grab a quick late lunch before hopping on the bus to the nations capital. At 4:00 we loaded onto the JETT Bus and for 11 JD each with a ticket we purchased back in Aqaba we were now wandering our way through the countryside for the next 3+ hours to Amman.

Very thankful our little family of four were able to spend this weekend together.
A lovey day for a hike in the woods.
There are no words for how insanely proud and amazed by these girls I am each and every day, but yesterday topped it all!
Be free little ones!
Another back country adventure in the works. This could be our final trip of the season or we may be able to squeeze one more in….
These two 💗
Loading Comments...
%d bloggers like this: