After Petra we jumped on a 3-hour bus ride and headed to Amman, Jordan’s capital and, where almost half the population of Jordan resides. We settled in at Zaman Ya Zaman Boutique Hotel for 3 nights. This hotel was in the perfect location, right across from the Roman theatre and close to the shops and local market. This hotel offered dormitory rooms and rooms with shared toilet facilities and the option to have a room with private bathroom, which we chose. But weren’t completely prepared for what it entailed. 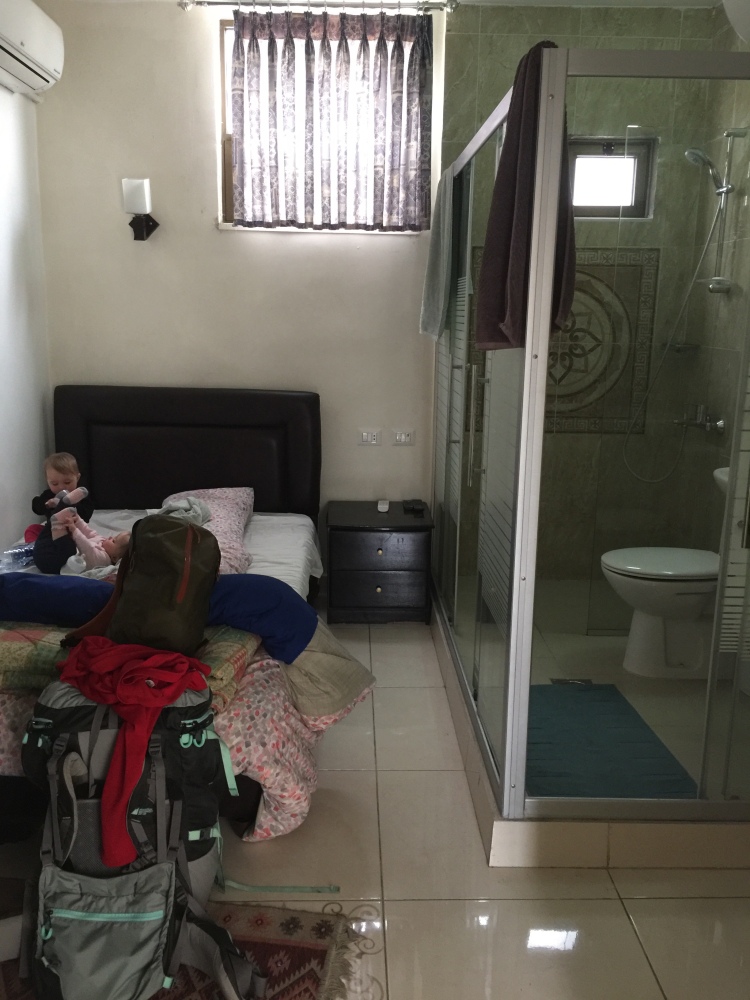 What I didn’t realize at the time was that it was a very squishy, barely a double bed only, with a very exposed bathroom. Haha. Good thing we are a close family. We asked for a heavy blanket and once the girls fell asleep we would relocate them on the floor so we could get a cosy sleep ourselves.

The following day we did a walking city tour visiting the citadel, Temple of Hercules, and Umayyad Palace. In order to see this we had to climb a ton of stairs as this is a very steep and hilly city.

We also stumbled upon some music video being filmed on location. The camera crew seemed to love the girls and took the opportunity for a few close up shots with the band in the background. They loved the babies and filmed them watching as well. So who knows, maybe the girls will be famous on TV over here one day. Upon leaving the Citadel we stumbled across some taxi drivers and got one lined up for tomorrow’s extravaganza.

Next we made our way back down the stairs and roamed the streets, weaving in and out of traffic, vendor stalls and food markets just taking it all in. The noises, colours and smells seemed to change every few meters. The streets of Amman seemed to have everything you could find elsewhere in Jordan only the prices were lower and the shop owners less aggressive. One fellow even gave the girls a bracelet each just because. We grabbed some yummy ice cream, which I always get the best flavours. Tyson always orders the odd ones where this time he ended up with chili chocolate and strawberry that was nearly to hot to eat.

The final bit of our city walking tour brought us back to where we started and found ourselves at the Roman Theatre all lit up and on display under the evening sky. A shawarma dinner completed our evening before heading back to our room for an awkward shower.

On day two we jumped into our awaiting taxi and headed to the JETT bus station to buy tickets back to Aqaba then stopped in at the Blue Mosque. 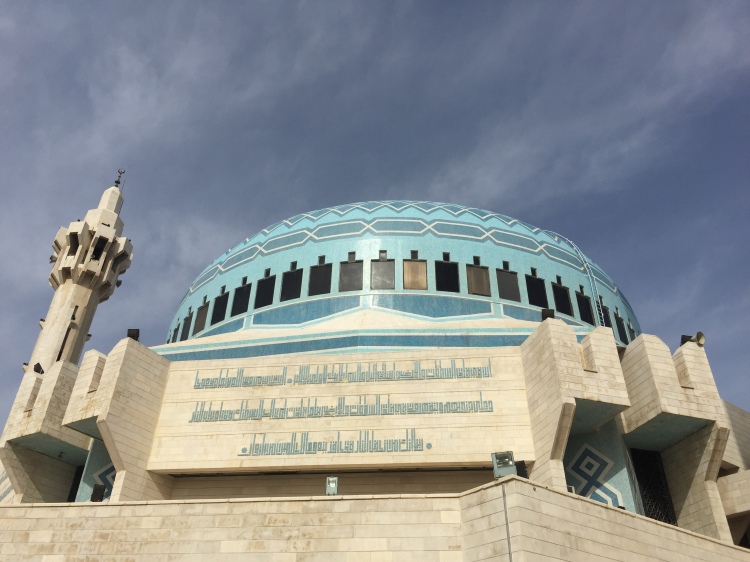 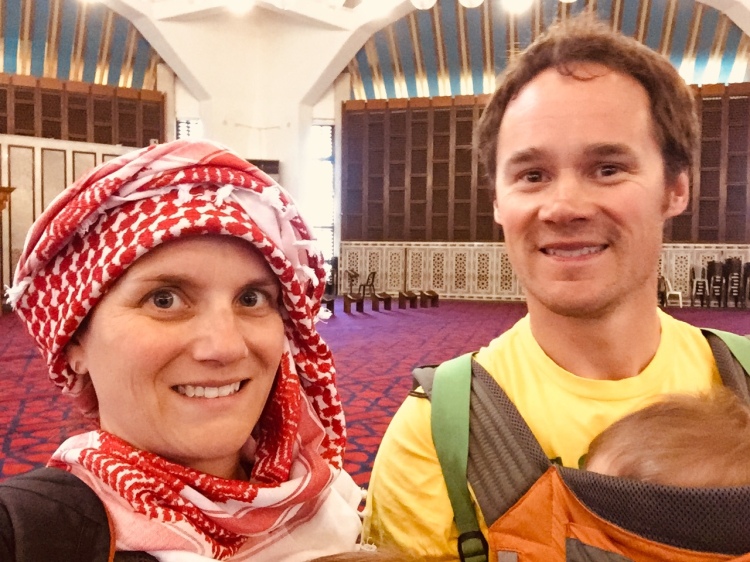 Here I was covered up to go inside by some ladies and required to leave our shoes at the door.

We then headed 1 hour north to Ajloun Castle, where it has commanded the hill ground for nearly 1000 years. It was largely destroyed in 1260, but almost immediately rebuilt. Earthquakes then damaged the castle again, though slow restoration is still happening.

I was quite amazed that we were able to enter and explore this entire castle.

Next and last stop was Jerash. This was largely a Roman creation and was very well-preserved. Again, I was quite surprised as to being able to explore anywhere and everywhere we wanted here. The sites were spectacular. 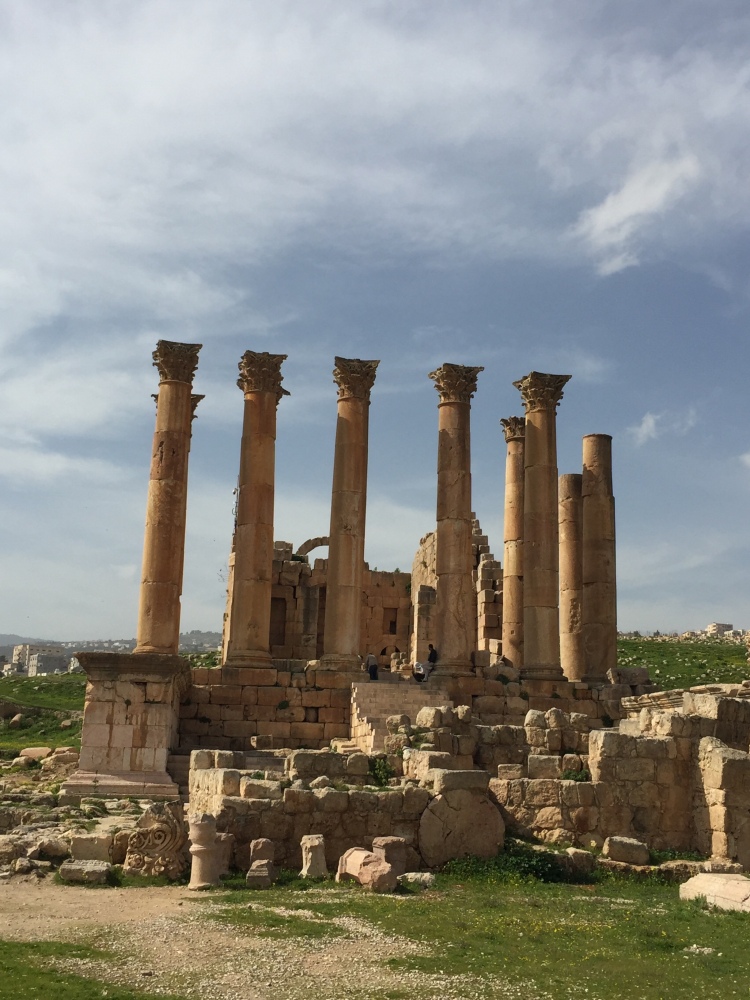 Jerash was another one of those places that leave you questioning about just how they could build something so amazing and detailed so long ago. We had a lovely day. The girls were really good, slept most of the time and the taxi guy was great until it came time to drop us off. We had agreed upon a flat rate of 45 JD prior to leaving. Once back he decided to change the price saying we look too long taking in the sites as well as he wanted a tip. He was asking for 65 JD. We were not impressed. There was a lot of back and forth and finally I got out of the taxi and let Tyson deal with it. Tyson gave him 55 JD and he still wasn’t happy so Tyson said he would go up to our hotel room and get another 5 JD. We took our time retrieving that 5 and when Tyson got back down the taxi driver was pacing and fuming. Tyson handed over the 5 and walked away. So even if you agree on a flat price prior sometimes that isn’t really the price.

We again walked the streets with one of the travellers dilemma on our minds. What and where to eat for dinner. Once that was solved we made our mandatory stop for ice cream then retired to our room. The following morning, with bags packed, we headed to the streets for a cab to the JETT station. To our amazement it was only 6 degrees out with wind and rain like we were in the tropics. The hilly streets were lined with nearly an inch of water that would dam up and flow over your shoes when walking. Quickly we raced out of the taxi and into the station. The same routine happened when boarding the bus. We decided to choose the VIP bus for 11JD rather than the standard for 8.6JD with hopes that we would get to Aqaba faster but neither of us expected what we received here. With oversized seats and only two and one seat on either side of the off set isle we were now cruising in luxury. Not only was this bus top quality but it also had a catering service, made no stops and we had enough leg room to stretch out and catch a few winks. After 4.5 hours and nearly 400kms we were now back down at the sea and ready for round two of Aqaba.

Very thankful our little family of four were able to spend this weekend together.
A lovey day for a hike in the woods.
There are no words for how insanely proud and amazed by these girls I am each and every day, but yesterday topped it all!
Be free little ones!
Another back country adventure in the works. This could be our final trip of the season or we may be able to squeeze one more in….
These two 💗
Loading Comments...
%d bloggers like this: